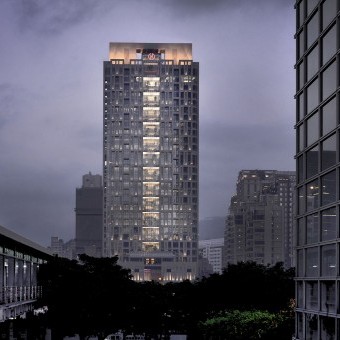 2015
A new standard in high-rise design – with a subtle Chinese touch
The new Headquarters of Hua-Nan Bank in Taipei by KRIS YAO | ARTECH
Author: Ulf Meyer

This has never happened before in the history of mankind: One single architect designs a whole cluster of skyscrapers, shaping a whole district and the skyline of a metropolis in just a few years time - and in very different styles. But this is the case in Taipei’s Xinyi District and with Kris Yao of KRIS YAO | ARTECH.
He and his firm designed six (!) high-rise buildings, all along one street, the Songren Road. The latest addition to this impressive collection is the new Headquarters building of Hua Nan Bank, one of Taiwan’s biggest private banks. Actually, the architects joke, that when combined their towers would by far exceed the nearby 101-Tower in height.

At first glance, from the outside, the Hua Nan Bank HQ looks like a fairly non-descript, but elegant and well-detailed tower. Its true qualities only reveal themselves on the inside. While banks will always prefer an architectural expression of “trust and stability” and a certain aura of conservativeness, in the case of the new Hua-Nan-Bank building the client and architect still allowed – if not favored – some key innovations: Operable French windows, even on the uppermost floors, sky-gardens on every other floor for the employees to enjoy and a vaguely Chinese pattern for the external sun-screens for example.

The architects had one the first price in a small, invited architectural design competition with only three contenders. The same architects had earlier designed the private residence of the bank’s director, so the two parties already knew one another to some degree.

Urban design /
While the mediocre neighboring buildings to the North have towers growing out of stepped podiums along the street, the Hua Nan Bank Headquarters rises from a single, three-story podium with the main entrance along one long side of the rectilinear plan, facing west. It follows the modernist paradigm of a solitary tower on a plaza, which does not do much to animate the streetscapes around it. But ever since Mies’ Seagram Building in New York, it has been proven as a formula of good visibility of the main elevation. The open space at the foot of the tower resembles a landscape composed of native plants. Its irrigation demands are fully covered by rainwater and grey water.

While the Kelti Tower nearby is largely speculative, the Hua Nan Bank Tower is largely owner-occupied. When the first tower was designed, the architect had no way of knowing that he would soon also be commissioned to design the taller tower nearby.

The façade /
The most interesting thing about the façade of the new Hua Nan Bank tower is the connection of two floors each into one “packet”. This makes the tower appear taller and more slender then it actually is. In front of the regular façade and thermal enclosure there are double-height sky gardens and external structural frames. They contain shading devices made of extruded aluminum louvers with a vaguely “Chinese” diagonal pattern. The client actually asked the architect to include some “Chinese” motifs into his design. Standing almost across the street from the Taipei 101-Tower, we are constantly reminded that if the Chinese architectural heritage is not translated into contemporary design, but just applied as an ornamentation, it will look kitschy. Kris Yao is more talented than his famous counterpart, C. Y. Lee, in achieving this required design transfer. His window sashs look fresh and abstract a vernacular motif into an urban contemporary look. Kris Yao had earlier used the Chinese sash pattern for the Wuzhen Theatre in Zhejiang/China, but for the Hua Nan Bank in Taipei he developed a more regular geometry. The sun-shading capability of the sashs is limited, but Low-E-glass has been used in the actual façade, helping in keeping the summer heat out and reducing the cooling loads. The outer facades are clad in brown granite imported from Brazil that comes in polished and textured surfaces.

Although the tower is “only” 27 upper floors tall, it is the tallest in its immediate neighborhood. This is no coincidence, since the client explicitly asked for that and built more then he needed. Thus, floors 6-11 are rented out to third parties - and floor-to-ceiling-heights are rather generous, which of course is very nice. In the future, the empty lot to the North of the new bank tower could however get an even taller building potentially, as it still is vacant. To the North of that site, the Kelti Tower, designed by Kris Yao as well (who else?), currently creates a gate-like situation, especially since both of Yao’s towers are clad in a brownish natural stone, showing the fact that they are relatives, even if the Kelti Tower is more expressive in its shapes. The Hua Nan Bank, probably like any other bank in the world, wanted something “conservative” that lets clients see “stability” in their corporate architecture. A surprisingly big amount of customers is expected to come to the Headquarters Building regularly, considering the big banking hall at the back side of the ground floor.

Sustainability /
The architects claim that their building is reasonably “green” despite the obstacles derived from the urban design regulations for Xinyi District. They say that “contrary to sustainable design, the city planning has most lots facing East/West. The building’s fronts are east or west, posing challenges in designing a green building.”

Well, despite the orientation issues, the Hua Nan bank building still managed to acquire a LEED “Gold” rating in sustainable design by the USGBC as well as a EEWH “Gold” (candidate certification) in Taiwan. The main plus points are a narrow floor plate, allowing daylight to reach the depth of the building and a small green roof that captures and retains water. Rain water is harvested and used for irrigation, while the grey water is recycled for toilet flushing. All water fixtures and urinals are water-saving. The stacked double-height “sky gardens” with internal circular stair cases also act as thermal buffers which reduce summer heat-gain along the western façade that is exposed to the hot evening sun. The sky-gardens also act as meeting and relaxing spaces for staff and allow for more interesting view connections in the building then is typically the case in an all-compartmentalized high-rise building. The sky-gardens have eight different trees varieties planted in round planters. Big ceiling fans achieve some thermal de-stratification.

Structure /
The steel frame building with outrigger trusses is east-west facing and 154 m tall. Its peripheral structure is pushed outwards like an exoskeleton, creating little balconies and acting like a brise-soleil (sun-shading devices) as well. The rectangular floor plans are column-free, making them highly flexible. Actually, non-descript floorplans are a “sustainable” feature, potentially increasing the lifespan of a building, even though this is not properly addressed in the green-building rating systems. The design of the tower frame is controlled by drift under lateral seismic and wind loadings. In order to control drift, outrigger trusses are used on the roof and level 16. They connect the central braced core to the perimeter columns. As is always the case with Artech’s buildings, the detailing is given a lot of care and the interiors feel warm and elegant not unlike in a four-star hotel.

Conclusion /
Kris Yao wrote high-rise design history in Taiwan, when he designed the Continental Engineering Building, a finely detailed and innovative tower, largely freed from corporate American skyscraper design influences. This set the bar very high. The new Hua Nan Bank Building will not get such a prominent place in Formosan architectural history, because of its more understated, heavier and conservative expression. That is despite the fact, that the true qualities of the Hua Nan Bank Tower are to be found inside: The sky gardens, the tall ceilings, the balconies, operable facades at every level, the greenery, “Chinese style” sun shading and smart environmentally friendly design details make the new Hua Nan Bank Tower in Taipei a new standard in high-rise design in Taiwan, that other buildings have to catch up with.
Share
BACK TO